Replace your amp or device’s bulky low-quality switch with a durable switch in a compact enclosure.

Need an upgraded or smaller switch for your amp or device? Saturnworks amp/device switches are compact and high quality, for amps or other devices requiring basic on/off  switching.

Please note: if you don’t see what you’re looking for here, please check out our tap tempo pedal page. There you will find a large selection of momentary (aka unlatching) switches.

The single latching switch replaces the Marshall P801, the Boss FS-5L, the JHS Red Remote, or any other amp or device footswitch that requires a simple latching TS (mono) on/off (open/grounded) footswitch.

Saturnworks double switches come in both latching and momentary variations. Our latching versions have options for internally or externally powered LEDs (see note on LEDs below).

If you need a TRS (stereo) cable to connect a double-switch to your device, we have them here.

Saturnworks switches are compatible with a variety of amps and devices. However, it is up to you to determine whether the switch will work with your amp or device before ordering. There have been many thousands of amp and switch combos on the market over the past 70+ years. We don’t have a comprehensive list of amps or devices compatible with Saturnworks switches. Some devices use basic/standard switch configurations, while others use specialized setups with extra components such as diodes, resistors, etc.

To determine compatibility please consult your amp’s owners manual or contact the manufacturer and inquire whether a basic open/closed latching or momentary footswitches will work with your amp or device.

As we’re always trying to figure out which switches are compatible with which devices, we like to post videos of customers who figure out when a switch we sell is compatible with a new amp or device. We will be listing those types of videos below. If you are able to make a video of one of our switches being used with your devices, please feel free to send us the link and we will post it as well.

Looking to replace a switch for a Boss or Roland device? You’ll need to determine whether your application requires momentary or latching switches. Check your Boss owner’s manual. If your device calls for the FS-5U, then you need a momentary (aka unlatching) switch. If your device calls for the FS-5L, then you need a latching switch.

Customer occasionally try to use a single TS switch with an amp or device designed to work with a 2-button TRS configuration. If what you’re trying to switch is on the tip of the TRS connection then it will work. But if what you’re trying to switch is on the ring, a single TS switch won’t work. In that case, the ring will always be grounded, regardless of the switch position. If you’re trying to use a single switch to activate only what is on the ring of a TRS setup, the pedal will need to be specially built with a TRS jack and the switch installed only on the ring. You will also need to connect it with a TRS cable. That special configuration is available by request. Please contact us for more information.

Please note: There are two ways to wire LEDs on external controllers, in parallel or serial to the lead current. Most amps that provide power for external control switches work with the LEDs wired in parallel. However, some amps’ switches may not work properly with a parallel LED setup (Mesa Boogie seems to be one, and there may be others). By default, we wire the internally powered LED switches with the LEDs in parallel, but we can wire them serially by request. If you’re not sure if your external control switch needs to be serial or parallel, you may need to contact the amp/device manufacturer for more details.

This is the schematic for our latching switch with an internally powered LED (with the LED wired in parallel), in case you need to run it by a manufacturer.

To get a sense of how the LED polarity toggle works, check out this video that a customer made, using his polarity toggle switch to fix a common ‘problem’ with Orange amps–that the LED lights up when the effect is OFF.

As you can see, there can be a lot of variables with external control switches. If you’re not sure if your amp provides power for the LEDs, the LED polarity relative to the lead current, or if the LEDs should be wired serially or in parallel to the lead current, it is best to go with the externally powered version with polarity toggles. An externally powered LED version covers you for most latching switch/LED configurations. The external version keeps the lead current and LED current separate  and you can set the LEDs to work how you want them to. 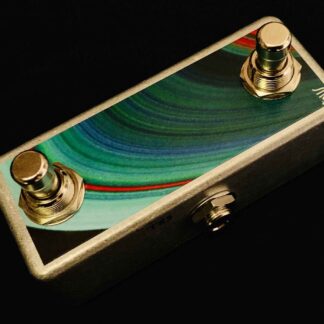