Why use a buffer?

With the rise of true bypass pedals, buffers sometimes get a bad name. Some players have come to associate buffers with tone loss. However, without at least one buffer in your signal path, you may be actually loosing tone, particuarly your high-end.

Standard guitar signals are relatively weak (high impedance). As as weak guitar signal signal travels through yards of wire, switches, jacks, pots, and other components, it starts to degrade. This signal degradation is most often experienced by a loss of high-end signal. As your pedalboard gets larger, and/or you are far away from your amp, your guitar can sound duller.

A buffer makes your signal ‘stronger’ (lower impedance) but not louder (unity gain). Due to the buffer’s low impedance output, your signal is less subject to degradation.

Click here for an informative video on how a buffer can preserve your tone.

Click here for an article on how buffers work.

Saturnworks buffers keep your high-end crystal clear over long cable runs. Some players prefer the tone of transistor buffers versus their IC cousins. We have both flavors.

The bass versions tweak the design to allow the bass’ lower frequencies to enter the circuitry. Check out our FAQ page for more information on how bass specific pedals work.

Saturnworks buffers output a very low impedance signal (in the tens of ohms rather than hundreds of ohms). Due to this very low output impedance, lower than most buffers on the market, your signal stays sparkly and clean. Our buffers uses the same circuitry and boutique components used in pedals that cost several times more. Why pay more?

This handy phase inverter can be useful if you’re experiencing out-of-phase issues while splitting or summing multiple signals. It can also just be used by itself as regular buffer. The phase switch flips the phase 180 degrees. Our phase switch is available with either a toggle or footswitch.

The switchable buffer is the same high quality circuitry as the standard buffer pedal, but features a true bypass footswitch to turn the buffering circuitry on/off. Please note: switching the buffer on/off may cause a popping sound. However, a buffer isn’t the type of circuit that you would typically switch on/off during a performance or recording, like an effects pedal. Rather, it’s something that you may turn on or off when you’re setting up a rig: either setting it up to be buffered or not. So a one-time pop (if the amp is on for some reason when you’re setting up your rig) is not generally an issue.

The dual and triple buffers feature two or three separate buffering circuits in one enclosure. You can use these multi-buffers to keep your signal strong both at the beginning of your pedalboard, and again at the end. You can also use them to preserve your signal in parallel setups, or any other application you can think up for multiple buffers.

The dual buffer is also handy to connect your setup using the ‘4 cable method.’

Please note: the default configuration of the is pedal is two inputs on the right and two outputs on the left. However, this can be customized so that the inputs and outputs can be set up on whichever jacks you’d prefer – if you want to set it up on the edge of a pedalboard and want the two inputs to be on the same side, for example. Please contact us for customization options.

The ‘reversed top channel’ version works the same as the standard dual buffer, except that the top channel’s signal flow is reversed, going left-to-right, rather than the standard right-to-left. So the bottom channel is right-to-left and the top channel is left-to-right. This configuration allows you to easily connect the dual buffer to a pedalboard and buffer your setup both at the beginning and end of your pedalboard–the dual buffer both buffering your signal and functioning as a patch bay. You plug the guitar input into the lower right jack, the ‘send’ to your board to the lower left jack, the ‘return’ from your board to the upper left jack, and your amp to the upper left jack. 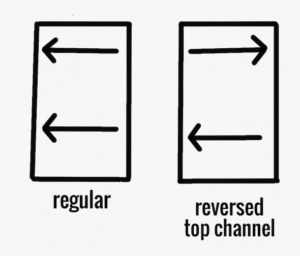 The Saturnworks buffered splitter is the best way to split your signal. The Saturnworks splitter features two buffer circuits: one on each side of the split. The dual circuit design works great to prevent signal or level loss.

The Saturnworks active volume pedal is a volume control plus a buffer in one compact package.

The Saturnworks active volume pedal has a built-in buffer combined with a 25k audio taper pot to prevent high-end roll-off as you turn down the level and preserve your guitar’s high-end over long cable runs. This pedal is perfect for use at the end of your signal chain to both control the overall level and to keep the signal strong between the pedalboard and the amp.

The Saturnworks active A/B/Y takes a single output and switches it A/B style to one of two outputs (A or B), or, with a second switch, to both at the same time (Y). The active version features a built-in buffer to prevent signal loss in split (Y) mode. The active buffering circuitry also prevents high-end signal loss over long cable runs.

The bass version tweaks the design to allow the bass’ lower frequencies to enter the circuitry.

Everyone knows how an A/B pedal works…camera one/camera two. How about a pedal that seamlessly pans your guitar back and forth between two amps? Say hello to the Saturnworks pan pedal.

You can set the knob fully counterclockwise for one output, fully clockwise for the other, or anywhere in between to blend the two. An included Dunlop rubber knob cover makes turning the knob with your foot a breeze. The Saturnworks pan pedal uses dual buffers for smooth panning across two outputs without tone loss. If you only have one amp plugged in, you can use the pan pedal as a buffered volume control.

The compact black blender buffer buffers your signal and allows you to dial in a wet/dry mix of whatever is in its FX loop. The blender buffer does not have an on/off switch for the loop. Rather, you can just the control knob to fully wet, fully, dry, 50/50, or anywhere in between. If you just want to use it as a buffer, simply turn the knob fully counter-clockwise. The black blender buffer features premium components including a powder coated black enclosure, Lumberg jacks, and a metal control knob.

We know you want your pedal to reflect you. We therefore offer a variety of premium upgrades. Customizations and upgrades include powder-coated enclosures, upgraded jacks, and custom graphics. Check out our graphics and customizations page for more information.

Please note: The pedals in the images are stock photos and not the actual pedals you will receive. The pedals you receive may vary in their graphics, knob colors, and/or LED colors, where applicable. We have our graphics options here. 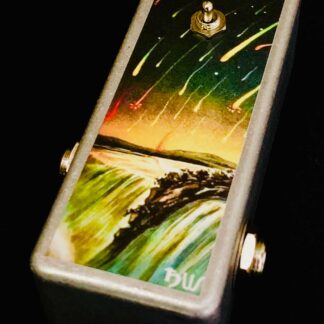