Saturnworks offers a wide selection of multi looper pedals in serial and parallel configurations. We also have additional product pages for single loopers and feedback loopers.

The Saturnworks true bypass 2-looper lets you make any pedal true bypass or turn on/off groups of pedals with a single click—times two. You can also use the 2-looper as an A/B pedal, a tuner out, or a kill switch.

The A/B double looper has two loops that are switched back and forth with one switch A/B style. With the master bypass version, a second switch bypasses both loops.

The blender looper blends whatever is in the loop with your incoming dry signal. A single knob controls the wet/dry ratio. It uses a simple parallel signal path to accomplish the wet/dry blending. An active buffer circuit maintains your signal integrity.

New beginning in 2020: The blender looper features a toggle that selects either a guitar or bass input. The bass input setting allows lower frequencies to enter the circuit.

The Saturnworks true bypass 3-looper, 4, 5, and 6 multi looper pedals let you make any pedal true bypass or turn on/off groups of pedals with a single click—times three, four, or five.

The multi-loopers with buffers feature an active buffer that is able to be switch on/off with a toggle. The buffer keeps your signal clear over long cable runs. The bass version tweaks the design to allow the bass’ lower frequencies to enter the buffer circuit.

The parallel looper first splits the incoming signal. Each of channels has its own discreet buffer. The two buffers keep the signal strong and ensure there is no crosstalk or interaction between the channels.  The two signals are then sent to switches that allow you to turn them on and off individually, and then on to loops, where you add your own sonic flavors. The signals are then remixed in an active mixer section that seamlessly blends the signals from the loops.

The versions with a dry channel feature a third ‘straight through’ parallel channel, with a level control but no footswitch, which allows you to blend the ‘clean’ dry signal as an extra parallel signal along with the two parallel loops.

Check our our demo video of a 2-parallel looper with a dry channel.

Please note: parallel loopers are custom made-to-order pedals with a turnaround of 2-3 weeks.

The parallel looper first splits the incoming signal into three or four channels, depending on the version. Each of the channels has its own buffer. The individual buffers keep the signal strong and ensure there is no interaction between the channels.  The split signals go to loops, where you add your own sonic flavors. The loop returns have volume controls and on/off switches, which allow you to tweak each channel as it goes to the mixer. The mixer section then seamlessly blends the signals from the loops.

The parallel multi-looper features either three or four loops with an extra switch as a master bypass, allowing you to bypass the parallel setup completely and send your signal directly to your amp.

The 4-parallel looper with phase switches features active phase switch circuits on the returns of the four loops, in case you encounter any out-of-phase issues while mixing your signals.

The bass version tweaks the design to allow the bass’ lower frequencies to enter the buffer circuit.

5-parallel multi looper pedals feature the same parallel circuitry as the 3/4-parallel loopers, except with five parallel loops, and no master bypass.

The loopers with phase switches add active phase-reversing circuits to help with any out-of-phase issues that can happen when summing.

So you’re looking for some custom or premium gear? Check out our customization page for the types of customizations and upgrades we offer. Also check out our upgrades page to add premium components such as Switchcraft jacks, soft click latching switches, powder-coated enclosures to your pedal. 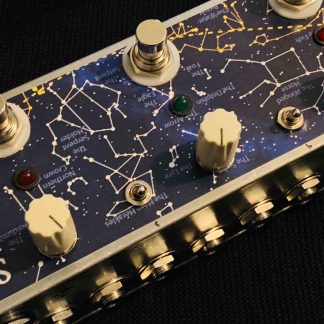