Kill your signal in style with Saturnworks momentary or latching kill switches.

Saturnworks kill switch pedals allow you to turn off your signal with a soft touch footswitch, a latching footswitch, or an arcade switch.

The soft touch and arcade switches can produce a ‘stutter’ effect. Holding down the switch kills the signal. It comes back on when you release it. One of our great customers posted an interesting video of the Saturnworks arcade kill in action (at the 2:45 mark).

The reversed soft touch and arcade switch work like the regular versions, except (you guessed it) in reverse. With the the reversed version, the signal is normally off. Holding down the switch turn the signal on. It turns off again when you release the switch.

The momentary + latching version is available in either a horizontally or vertically oriented layout.

The combination kill switch/looper adds either a latching or momentary kill switch as a second, along with a single true bypass looper. The momentary version is soft-touch switch that can create a stutter effect, or momentarily switch off the signal for whatever reason you’d like. The signal is off while you’re holding down the switch. The latching switch can be toggled on or off. The latching version includes an LED that indicates when the signal is off. With the LED version, the switches themselves don’t require power. The power, provided by a DC jack, is only needed to make the LED light up.

Our two-channel latching kill switch has two separate signal paths. Each channel has its own on/off latching switch.

Our two-channel latching kill switch with a TRS input also has two separate channels with on/off latching switches. On this version, though, the input is TRS. The two (tip and ring) channels are separated into their own TS output jacks.

Saturnworks offers a wide variety of upgrades and customizations including custom enclosure colors, metal knobs, premium jacks and soft click latching switches. Check out our customizations and upgrades page, or contact us for details.

Please note: Momentary kill switches can have light click or popping sounds when switching the signal rapidly on and off. This is just the physics of sound waves as they’re abruptly cut off and does not indicate that there is a problem with your switch. This phenomenon may be more noticeable with clean sounds while not as noticeable with distorted sounds, as distorted sound waves themselves are already ‘clipped’ waveforms.

Please note: The pedals in the images are stock photos and not the actual pedals you will receive. The pedals you receive may vary in their graphics, knob colors, and/or LED colors, where applicable. We have our graphics options here. 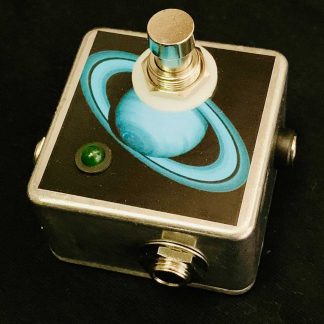