Set the tempo or use as an on/off switch with a huge variety of compatible devices.

Scroll down for variation descriptions.

The Saturnworks micro soft touch tap tempo is the same solid tap tempo as the standard soft touch tap tempo, but squeezed into the smallest package possible, a tiny 2” x 2” cast aluminum enclosure. It is available with either a normally closed (NC) switch for Boss devices, a normally open (NO) switch, for most brands other than Boss, and a TC Electronics variation that works with external tap compatible TC Electronics devices.

The TC model is a normally open ring-to-ground switch that must be connected with a TRS patch cable, available here. This video provides helpful information on how to set up a TC Flashback 2 with an external tap tempo. (Please note, the Saturnworks TC micro tap should be connected with a regular TRS cable, rather than the custom TRS to TS cable that he builds.) The TC variation also works as a tap tempo for the Source Audio Nemesis.

We also have a TRRS tap switch specific to Source Audio devices. This version connects with a 1/8″ TRRS jack. This tap version includes a 1′ 1/8″ TRRS cable. Please note: This switch is not a simple plug and play type of external switch. The setup for this external switch is a lot more complex and requires you to configure external switching with your device using SA’s app or desktop software. If you don’t do that kind of configuration, using a mobile device or computer, the switch will not function.

The Strymon version allows you to set the delay rate for compatible Strymon devices. Strymon uses a non-standard TRS configuration and is not compatible with standard tap tempo pedals. The Strymon configuration requires a TRS (stereo) patch cable in order to function properly. We have TRS cables available here.

The pro dual tap tempo lets you synch two devices with a single switch. The dual tap comes with both jacks wired as normally closed (NC), both normally open (NO), or one of each (NC+NO).

The pro dual tap tempo is also available in reversible a polarity model. The reversible polarity version allows you to independently set the polarity of each jack as either normally open (NO) or normally closed (NC).

This pedal works like the Boss FS-6 in that it combines two tap tempo switches in one pedal and is connected with a single TRS (stereo) patch cable.  This version is available with either pro or soft touch momentary switches. By default it comes wired as normally closed, for use with Boss devices. But like the other pro tap tempos, it can also be wired as normally open. 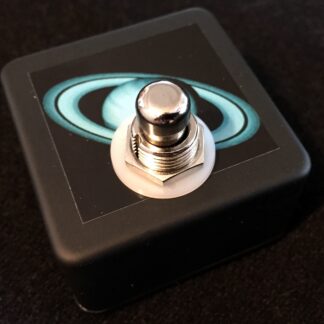