Wah pedals with selectable tonal ‘voices,’ as well as tweakable controls for pedals that spans the wah universe.

The Saturnworks Cosmic Wah pedals are super wahs that covers the entire wah universe. The Cosmic Wah pedals feature a selectable voice control that gives you five different wah voices: from low and growly to high and piercing with every wah emanation in between. The Saturnworks wah also features an external gain control so that you can match the level of your bypass signal, or give it a slight boost.

The fixed wah has the same tweakablility, but with a regular control knob to control the wah filter, rather than a foot rocker. This lets you create a “parked” wah sound, or the tone of a wah pedal set to a certain position. But rather than trying to guess where to position a foot rocker, you simply set the knob and switch it on as you would any other effects pedals. No more fumbling around for that perfect ‘sweet spot.’ Instead, your perfect instant on Q setting.

Inside, the Cosmic Wah pedal features trimpots that adjust Q-control, ‘honk,’ and ‘saturation.’ These allow you to fine tune the perfect wah tone.

Please contact us with any questions and to inquire about customization options. 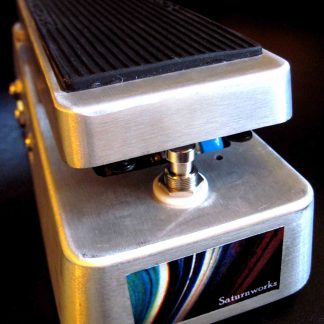